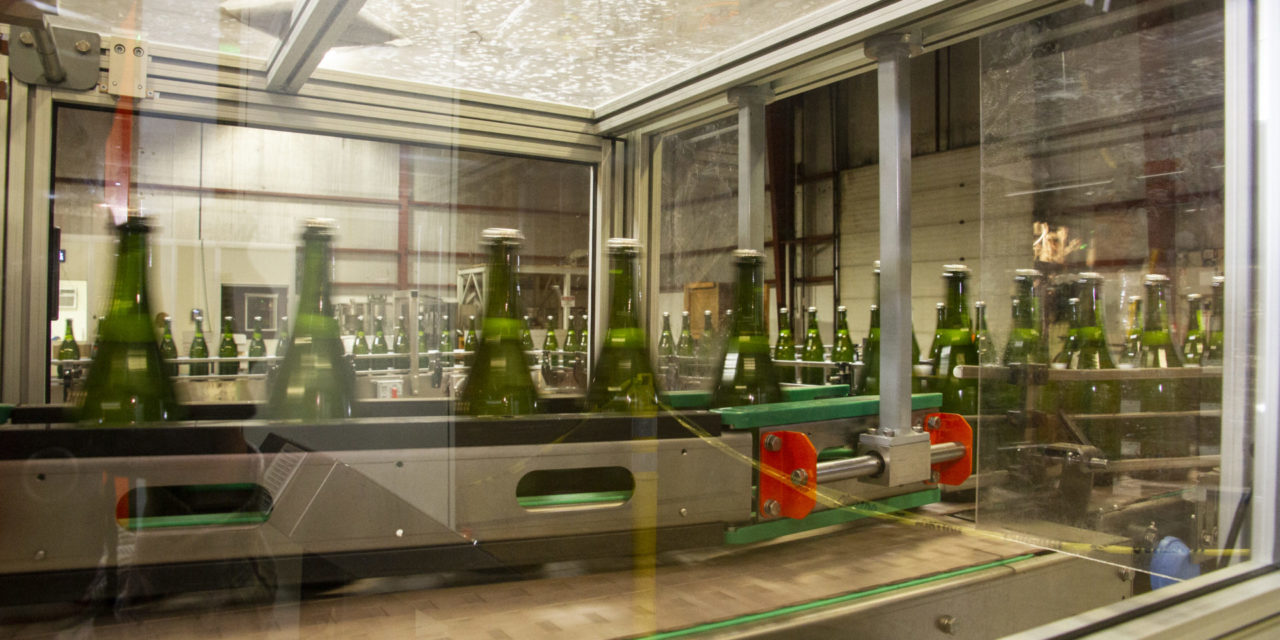 You have to be just slightly natters to engage in a livelihood that can literally blow up on you—and yet, the sisterhood (and brotherhood) of bubbles runs deep. That’s probably why it’s considered the ne plus ultra of winemaking.

There are many ways to sparkle a beverage, but méthode Champenoise is considered the highest form of sparkling art. It’s a process that’s been painstakingly perfected, by hand, over the centuries. It requires two entirely separate fermentations, the second of which occurs in the bottle, which is where the magic happens. Says Todd Graff, winemaker and general manager at Frank Family Vineyards in Napa Valley, “The secondary fermentation in the bottle is the trickiest part, because however many bottles you’re making, each is an individual fermentation.” 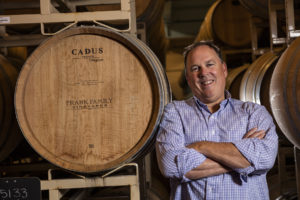 “However many bottles you’re making, each is an individual fermentation.” —Todd Graff, Frank Family Vineyards

Méthode Champenoise is time consuming, filled with repetitive tedium, complicated (often by many months of dosage trials), and sometimes fraught with peril (anything involving gas at multiple atmospheres of pressure can be explosive). But it’s the only way to make the fine mousse that’s the hallmark of superior star juice.

Recently, some sparkling producers have turned to robots and automation to make operations safer and more consistent.

It starts when expired yeast from the secondary fermentation must be collected, using a process called riddling, which inverts and slowly rotates the bottle, forcing the sediment towards the crown cap.

The bottle neck must then be frozen so the yeast can be disgorged, generally using a Champagel machine (made in Epernay, France, by a 60-year-old company that’s now known as Duguit Technologies). To make up for the lost volume, liquid called a dosage is then added to the bottle (dosage is sometimes an ever-so-slightly sweetened wine, sometimes it’s the same wine already in the bottle). Disgorging and dosage are usually done by the same machine (often from TDD Grilliat in France). Finally, bottles are corked, caged, labeled, and boxed—a perfect application for automation, the extent of which will depend on case production, budget, and facility capabilities. 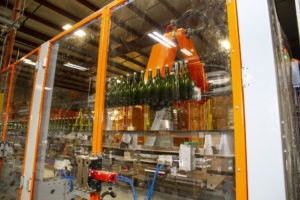 Larger production houses rely on specialized equipment, much of it built in France or Italy, countries that have decades of experience turning out bubbles on a mass scale. MASPACK Packaging USA (Healdsburg, Calif.), an arm of Italian-based MAS PACK, provides custom solutions for companies stateside turning out volume. It specializes in robotics that handle all aspects of automated bottling and packing, from depalletizers and decasers to case erectors, partition inserters (which can be done before or after bottles are put in the case box), sealers and packers, and then palletizers and pallet wrappers. It’s awesome to watch these in action.

Another big player in sparkling automation is Valentin Thierion, with offices in American Canyon, Calif. It’s been the leading French manufacturer of Champagne and sparkling wines production equipment since 1855, and specializes in disgorging equipment for sparkling wine. Last year, the company rolled out mobile disgorging services across the United States.

The poster child for state-of-the-art sparkling production using multiple robotics is Rack & Riddle in Healdsburg, Calif., where winemaker Penelope Gadd-Coster’s team crushed 6,400 tons of winegrapes last year (the bulk of it for sparkling). The largest custom sparkling producer in Sonoma County, it serves more than 100 brands, many of whom you might recognize, and perhaps even drink, perhaps regularly. Sorry, we can’t share names. 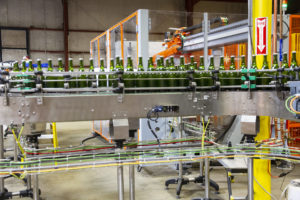 With the help of a custom system that employs robotics designed and installed by MASPACK Packaging USA, Rack & Riddle increased annual production to half a million cases—and can climb to 750,000 cases, according to General Manager Mark Garaventa. Prior to the new system, a partially automated line enabled 1,400 cases, per single production run, for an output of 350,000 cases annually. With the new robotic line, it’s nearly doubled capacity, with the ability to handle 2,700 bottles per run.

Here’s a snapshot of a sparkling wine’s life in the Rack & Riddle operation: Once wine is ready to undergo secondary fermentation, it’s pumped from its tank to an automated sparkling production line, where sugar and yeast have been added to the tank, triaged on this dedicated line, and then moved to cages and boxes by robotics. Bottles are then crown-capped and placed into storage bins, where secondary fermentation creates the fine, tiny bubbles one expects from méthode Champenoise. The wine then ages, on the lees in bins, from six months to a few years, depending on client wishes (Gadd-Coster says she’s aged wine on the lees for up to 7 years for one particular client). 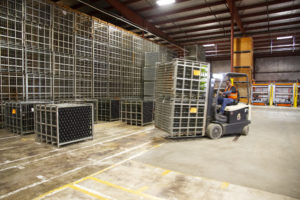 After aging, the bottles are put into riddling bins, where they are riddled robotically for 3 to 4 weeks. Bottles are placed neck-down on the production line, where the lees are frozen and popped out. Another robot moves the bottles from riddling cages to the neck freezer. Each bottle it topped off with the client’s choice of dosage, and, in an automated ballet of utter precision, the bottles are corked, caged, foiled, labeled, packed, and a robot moves bottles to the cases that are palletized for shipment. It’s a breathtaking performance with remarkably few witnesses. A handful of crewmembers stand by, ever observant, making sure the labels are all perfectly straight and watching for the occasional conveyor belt mishap. But mostly, it all goes like Swiss clockwork.

Asked how automation impacts labor, Gadd-Coster notes that Rack & Riddle has actually beefed up its team, and workers are doing more skilled tasks, instead of manual ones. Plus, because the company only runs a single shift now, there’s no need for workers to pull long hours (at least for the moment), meaning more time with family—and isn’t that the idea of a life worth celebrating?

Equinox, in Santa Cruz, Calif., is headed up by Barry Jackson, the “Archbishop of Bubbles,” who makes dozens of small lots of sparkling wine for producers such as Ser, Bonny Doon, La Rochelle, Scheid, Hahn, and local darling, Kathryn Kennedy. (In fact, it was Marty Mathis of Kathryn Kennedy who implored Jackson to purchase the Mirassou sparkling equipment after the company sold its name to Gallo.) 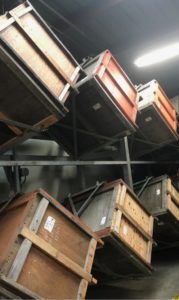 Automated sparkling equipment isn’t cheap, so there’s a lot of reuse and recycling. Jackson also acquired some of Wente’s sparkling equipment when it exited the bubblemaking business in 2006, including a Gyropalette (dating to the 1970s), made by Oeno Concepts of Epernay, France. To see this beastly old monstrosity in action is to witness The Terminator coming to life out of cold storage. Shaking and vibrating like its own metallic earthquake, it decisively manhandles heavy tirage boxes filled with up to 480 bottles each. Le Gyropalette employs a six-day cycle to rotate bottles from being on their sides to sur pointe, which means basically standing on their heads. It’s simple but so effective.

Jackson also acquired a corker and wine hooder from Roederer last year, and will soon be getting a new labeller from Valentin USA. “If the machines operate as I expect, we should be able to double our daily throughput,” says Jackson. “Currently, we can do 1,200 to 1,600 bottles in a day. In theory, we’ll [be able to] do this with fewer people, but we’ll see.” With more than 11,000 cases to handle yearly—3,000 of which are Wente’s Cuvee Brut Reserve Sparkling Wine—getting automated in every possible aspect is critical.

French champagne houses have been largely automated for decades to keep up with worldwide demand. The same can be said for Italy and prosecco producers. Arnaud Weyrich, longtime winemaker of Roederer Estate in California’s Anderson Valley, credits the legendary Michel Salgues, from whom he took the reins in 2003, for investing in automation more than 20 years ago: “If you buy the right equipment, it lasts 30 years.” 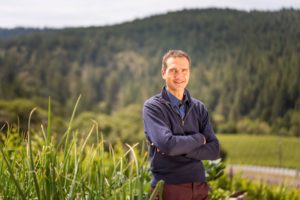 “We need machines to remove the heavy lifting. It makes the staff happy, and it makes the insurance company really happy.” —Arnaud Weyrich, Roederer Estates

Weyrich says the United States is 18 to 20 years behind France and Europe, from a sparkling automation standpoint. But, he observes, California has finally started to catch up over the last two to three years. Roederer recently added automatic bottle packing and palletizing, the former from French company Tecma Aries and the latter from Honeywell Intelligrated (based in Ohio). “There isn’t much value added by human labor in these repetitive situations,” he says, adding, “There’s so much stress. We need machines to remove the heavy lifting. It makes the staff happy, and it makes the insurance company really happy.”

He hopes to get his disgorging and packaging lines fully automated soon: “Eventually, I want no human hands touching a bottle, through the whole line, until a forklift driver picks up the pallets of finished wine.”

As for the impact of automation on labor, he points to the difficulty finding enough workers: “It’s so hard to find staff here that the robots are replacing ghosts. We’re going to be more efficient with the same staff, and we will train them to do more skilled and value-added tasks”—like disgorging all the cases of magnums, which must be done by hand, typically with a crew of five over a two-day period each month. There’s a lot of pride in those magnums. The company recently opened a few together to toast the enduring success of the brand.

In the heart of the Green Valley of Russian River Valley AVA, just outside of Sebastopol, Calif., sit 160 acres of prime chardonnay and pinot noir, earmarked for the 15,000 to 16,000 annual cases of Iron Horse Vineyards’ famous small-lot cuvees, which support causes near and dear to the proprietor Sterling family’s very generous hearts. Ocean Reserve, created in partnership with National Geographic, donates $4 per bottle to Nat Geo’s Ocean Initiative. Other offerings are disgorged and released seasonally, such as Gratitude, started after the area’s wildfires in 2017, $5 of which goes to the Redwood Empire Food Bank. 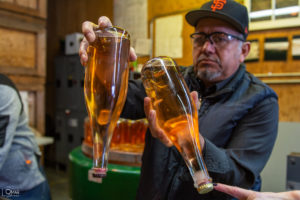 David Munksgard, winemaker at Iron Horse since 1996, has upwards of 40 vintages under his belt. Rather than hew to a formulaic style, he and the Sterlings seek the best vintage expressions each year. Munksgard favors whole cluster pressing, typically with no malolactic fermentation to preserve fruit (although he has a few lots in the cellar that are 100 percent ML), fractional pressing, and rigorous battonage; barrel ferments add complexity. “The result is great depth of flavor and character, yet the weight and texture remain light and silky to just glide across the palate,” he says.

Riddling is done both by hand and using a Gyropalette riddler. The outcome is the same, he says. TDD Grilliat Machines made the unit that does both the disgorging and the dosage. The winery uses an Ames cork orienteering machine, a Bertolaso corker, and Robino & Galandrino wire hooder. Asked if he’s considering additional automation elements, Munksgard says, not really. 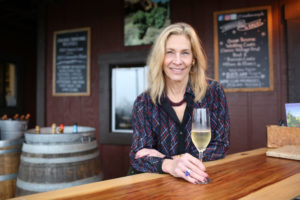 “I hate to say it, but I don’t want to be replaced myself.” —Joy Sterling, Iron Horse Vineyards

Asked the same question, Iron Horse CEO Joy Sterling admits that, since the winery started in 1980, much of its equipment is quite dated by now. She’d like to have a new press, but isn’t really interested in increased automation. “I hate to say it, but I don’t want to be replaced myself.” Those of us who’ve been en tirage a fair piece can relate.

Given that 2020 is a new decade and something to celebrate, Sterling suggests drinking 2005 Joy in magnums. It’s made from 100 percent estate-grown chardonnay, aged 13-plus years en tirage, and lovingly hand-bottled—because robots just don’t care. 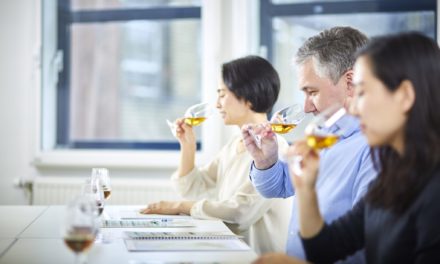 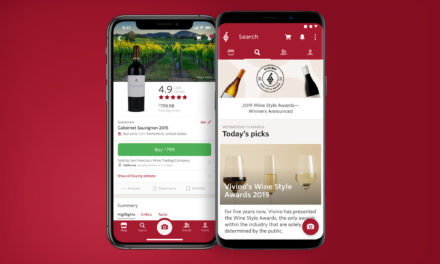