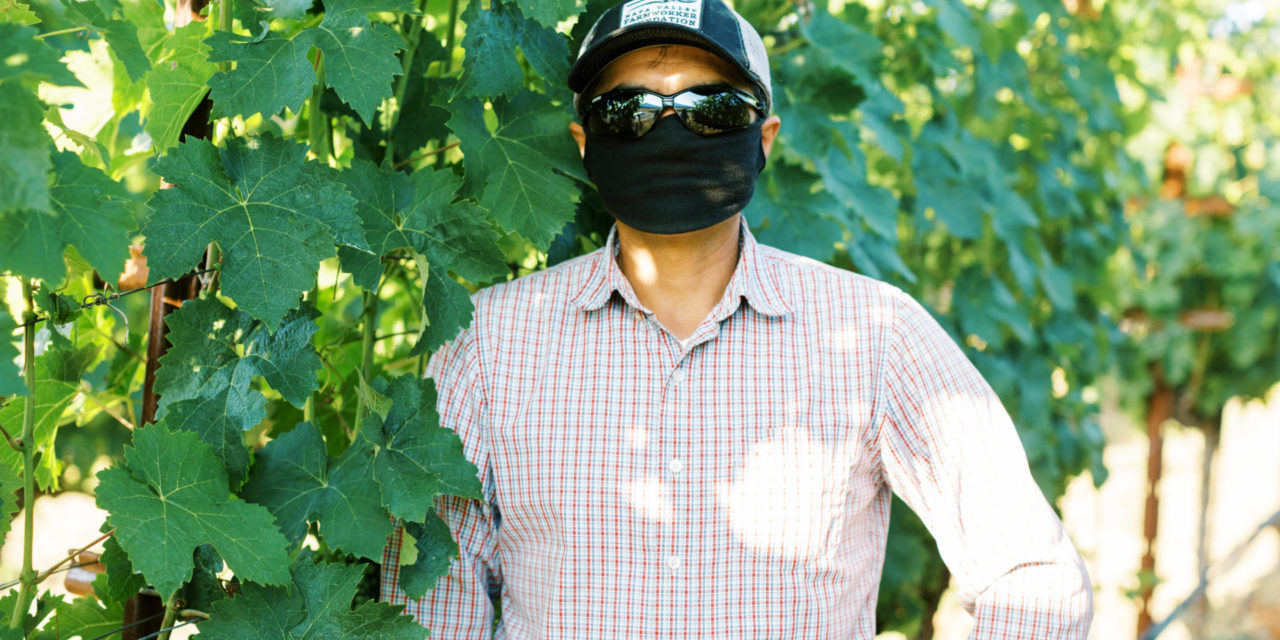 When Maggie Kruse began her first harvest as winemaker for Jordan Winery, things were anything but easy. Nestled in Sonoma County’s Alexander Valley, the winery was threatened by wildfires just as picking was completed in early October—for the second time in three years. “Everything was ‘normal’ until the fires hit and we were evacuated,” she remembers. “This year, it’s an entirely different and ever-changing scenario.” She notes the most important thing—no matter what the issue—is protecting Jordan’s team and keeping them healthy. 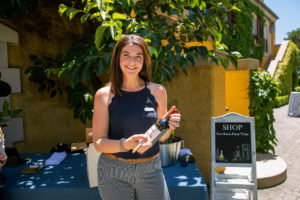 “This year, we were planning on two [harvest interns] coming in from Germany, but that won’t happen.” —Maggie Kruse, Jordan Vineyard & Winery

Staying healthy is top priority, regardless of location or even business type, as the world continues to handle the effects of the COVID-19 pandemic as best it can. And as this article is being written in late July, wineries and cideries are ramping up protection protocols amid so many constant changes and gray areas, it’s mind-boggling. Jordan, for example, has created a checklist regarding protocols to follow during this tumultuous time. It will be updated as new ideas come to light.

So how does one practice proper social distancing in fields and production facilities during harvest this year, when “all hands on deck” has been the norm since any of us can remember? The answer is, it largely depends on the situation. But the basics are universal: wear a mask, stay six feet away from others whenever possible, wash your hands regularly, and sanitize, sanitize, sanitize. We’ve all heard these things too many times to forget at this point. But that hardly means reminders aren’t effective: The best way to learn is by doing.

The labor shortage among vineyard and winery workers has been top of mind for decades. This year, the threat is even more substantial. One of the problems is that most wineries rely on traveling international interns coming to the US to continue building their winemaking skill sets by working harvest. Most interns come from other countries (or at least other states or cities)—something that’s now impossible in some cases, and dangerous in others. Interns are generally housed together, placed with volunteer hosts, or both. Not having access to this industry-established labor pool is an issue for lots of folks this year.

“We’re concerned because we usually bring in four or five interns annually,” says Kruse. “This year, we were planning on two coming in from Germany, but that won’t happen. And finding local labor will be scarce.”

Max Bruening, assistant winemaker at Ponzi Vineyards in Oregon’s Willamette Valley, has similar concerns. “We usually bring in five international interns,” he says. “At this point, all five have dropped. Do the people who can come quarantine before arrival? Do they need to be tested? How will we house them?” 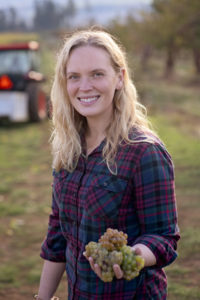 “We need to keep people safe and healthy. It’s a work in progress as we figure it out.”—Claire Jarreau, Brooks Winery

The intern program at nearby Brooks Winery has a different make-up altogether, and this year it will take additional steps to keep everyone safe. “We normally bring in professionals from both the consumer-facing side of the business, as well as skilled interns who are training to be winemakers,” says assistant winemaker Claire Jarreau. “That won’t change this year. However, we are hiring extra people to cover shifts when interns have days off. Previously, we had people from other departments help with that, but we’re isolating the cellar team this year.

“We’ve always provided housing for interns in our farmhouse onsite. This year, we’re spacing people out more by splitting them up into two homes [one a nearby rental] so everyone has their own room. The interns will do two weeks of quarantine upon arrival before starting work. Lunch and dinner will be served in pre-portioned boxes rather than family style, and the same goes for snacks. It’s not as environmentally friendly as we’d like, but we need to keep people safe and healthy. It’s a work in progress as we figure it out.”

Jennifer Putnam, executive director and CEO of Napa Valley Grapegrowers (NVG), notes rules and regulations are changing fast. “It mirrors everything else,” she says. Putnam is also executive director of the Napa Valley Farmworker Foundation (FWF), which was started by NVG in 2011 to support and promote vineyard workers through education and professional development. The two entities started a COVID-19 task force in July, and have since worked continuously to provide farm-working families with the information they need to stay safe at work and at home. “We’ve posted vineyard safety signs all over the valley, billboards along the highway, and have posters to hang in shade tents and outside bathrooms. We’ve also provided 10,000 masks to the workers.

“It’s also important to spread the information across county lines, because we share funding, equipment, and personnel,” she adds. “Things are changing every day, and we’re trying to stay in real time to disseminate the information in both English and Spanish.” NVG also has a dedicated COVID-19 page for the most updated information available, including webinars. FWF is also sharing the information on Spanish-speaking radio stations and social media platforms. 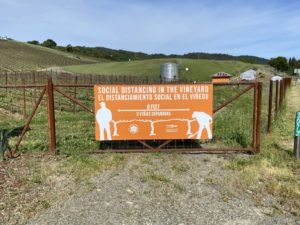 “Things are changing every day, and we’re trying to stay in real time to disseminate the information in both English and Spanish.” —Jennifer Putnam, NVG/FWF

“One of the unique things about Latino culture is people gather more frequently than others. It’s very family-oriented, with most households being multigenerational, which is lovely, but problematic among the pandemic,” says Putnam. “Isolation is a physically difficult and culturally alien concept. Carpooling is a concern. We’re trying to discover options and what role we can play to help bring in harvest as safely as possible. We must acknowledge it will look different than ever before. One of the biggest questions is how we can extend this information from work to home for all employees.

“We all as citizens have to feel like leaders,” continues Putnam. “We can’t wait for the government to hand over a plan. We have a responsibility as an industry for our workforce. We’re creating a model that other regions can replicate, and it needs to be implemented at all levels to be successful.”

In July, NVG and FWF announced a partnership with St. Helena Hospital Foundation, in which NVG and FWF have jointly funded a mobile health unit that travels to vineyard sites and can test up to 100 vineyard workers per day. The funds have secured an initial order of 3,000 tests.

Another resource is the COVID-19 Harvest Protocols Workbook, a 20-page resource created by California Association of Winegrape Growers, California Sustainable Winegrowing Alliance, and Wine Institute. The document clearly lists safety rules, suggestions, and requirements for every aspect of a winery, from administrative processes, to employee and visitor wellness, worker housing, training, communication, and more. It features checklists for each subject, as well as worksheets that can be customized to specific situations and workplaces. You can find the document on each of the organizations’ websites. 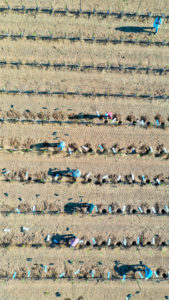 Jake Mann is co-owner and apple grower at Five Mile Orchard in Corralitos, Calif., in Santa Cruz County. He says harvest will start a in late August and run through early November. Most of the growers in the area provide the fruit for apple juice producers, while Mann has created a small section of his 75-acre orchard dedicated to apples grown for cider producers. He specializes in Newtown Pippins, an heirloom variety from 1700s New York. He’s also beginning to grow Kingston Black, Yarlington Mill, and Wickson Crab varieties for the same reason.

“At first glance, our harvest will mostly be the same,” says Mann. “People pick alone or in small groups into bins, which are taken by truck or tractor to the receivers. We don’t have a packing house, so most things are done outside,” he adds. He says his biggest fear is labor. “Labor is scarce around here for the industry. And now there’s a fear of sickness and hours lost,” he says. “The trees didn’t get the memo about slowing down.

“Keeping the equipment clean is important because people share tractors. Same goes for portable toilets; everything will have to be cleaned and serviced more often.”

So what happens once the fruit makes its way to the crush pad? As with anything else, it depends on the facility. Dan Warnshuis, owner and winemaker at Utopia Vineyard in Willamette Valley, produces his own wines as well as offers an alternating proprietorship within his production facility, which hosts four separate winemakers, besides himself. “We can run 24 hours per day to avoid overlaps,” he says. “We have a large whiteboard where everyone can schedule their time. Everyone is provided with N95 masks and hand sanitizer, and is required to social distance as much as possible. 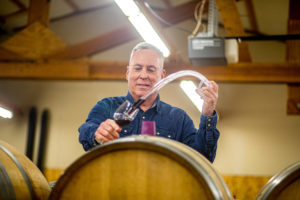 “We can run 24 hours per day to avoid overlaps.” —Dan Warnshuis, Utopia Winery

“During harvest and crush, there are a lot of vendors coming in, as well as different clients. All that has to be managed through scheduling and meetings with owners,” he adds. “Everybody will be watching out for each other, and we’ll keep the cellar well ventilated and sanitized, like always.”

Bruening agrees, as safety protocols are prevalent within the agriculture industry already. “As winemakers, we’re accustomed to keeping things clean and sanitized, given the nature of our work and the product we produce,” he says. “COVID has forced us to evaluate our sanitation practices and implement new protocols, but it’s been fairly easy to do with the collaboration and efforts of a very tight-knit industry coming together to help each other out.”

He says his biggest issue is slowing down, as Ponzi is used to moving quickly since it harvests multiple lots in great numbers. “Harvest is usually a fun, fast-paced time of year. As a team, we are looking at the process in a different light in an effort to evaluate where we can afford to slow down a bit,” he says.

“Many wineries in the valley and the state of Oregon are working together to figure out the safest ways to approach harvest. This includes but isn’t limited to how wineries interact as teams (given all wineries are of different sizes and production numbers), how wineries sanitize equipment we normally wouldn’t sanitize (like forklifts, picking bins, door handles, etc.), how to prepare and plan for someone getting sick. The main objectives this year are keeping people safe, healthy, and feeling comfortable; making the best wine possible’ and having fun doing it. 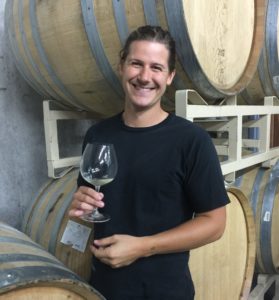 “Farmers in general are good at adapting to change quickly. We can persevere.” —Max Bruening, Ponzi Vineyards

“It simply comes down to being smart and working hard to reduce exposure and keep people healthy,” he continues. “We want to evaluate what we do and eliminate weak points to keep exposure and contact as minimal as possible. We’re considering contract tracing for staff. But if one person gets sick, what’s the backup plan? Do we stop for 14 days? We need a plan in place, or maybe two. Positive reinforcement is also important. We’ll provide incentives for staying safe and healthy.”

Focusing on the outcome

“One reassuring thing is that farmers in general are good at adapting to change quickly. We can persevere,” says Bruening. “Yes, being in a pandemic is weird, but we can figure it out. I think there will be good outcomes. We’ll be seeing things more clearly just by slowing down. There are silver linings everywhere if you’re willing and able to see them. God willing, we’ll get through this safely with passion, patience, and perseverance.” 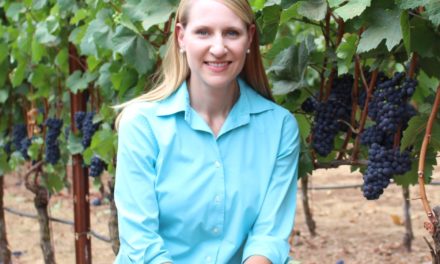 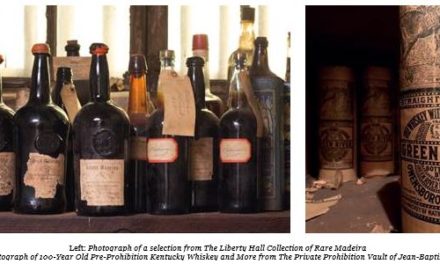 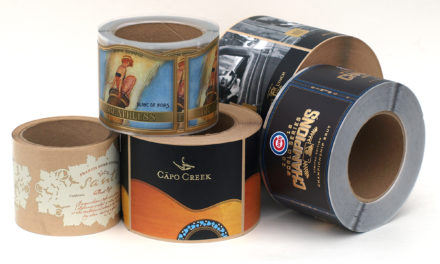 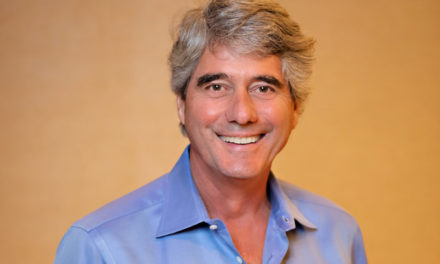